Mainline filter productivity over 20 m3 per hours. One of the latest examples of the use of the innovative water treatment system from the RUSTECHNOBUSINESS company  is the water supply system of the Vityaz Ice Palace in the city of Chekhov, Moscow Region.

The Vityaz Ice Palace complex was opened in 2004. He is officially recognized as the best sports facility in Russia. For many years, Vityaz has been holding the first place in the Moscow region in the nomination “The Best Sport Construction of the Year”.

The hockey arena of the Vityaz Ice Palace is an ice field of international class. During the construction of the complex, the most modern technologies and developments were used. In 2015, the turn reached the improvement of the water supply system by introducing innovative technologies of water purification produced in Russia.

Until recently, the Vityaz Ice Palace water supply was carried out by supplying (without further processing) water from the city water supply system of Chekhov. According to official documents, the liquid is fully compliant with SanPiN 2.1.4.1074-01. Drinking water.

In fact, water posed a certain risk to the life and health of people: it enters the Ice Palace through worn-out rusty pipes and collects mechanical pollution and bacteria along the way. When installing the water purification system, the specialists of RUSTECHNOBUSINESS were able to verify that the picture was not as safe as it seemed.

So, in November 2015, the leadership of LD Vityaz allocated resources to improve the quality of cold water through the use of innovative technologies. RUSTECHNOBUSINESS LLC (Moscow) was selected as the general contractor for the modernization of the water supply system.

In December 2015, a water treatment complex was installed at the entrance pipe in the Ice Palace. The dimensions of the equipment are very compact: the length of the complex was not more than 1 meter on the main entrance pipe. To combat rust and limescale, lime deposits were installed magnetic converters, including in the ice manufacturing system (when it is received, water heaters are used, as a result of which the pipe corrosion process is accelerated and scale is formed on heating devices).

The installation of the water treatment system was carried out promptly and professionally so as not to interrupt the work of the Ice Palace. Was then held

Experiment on the visual analysis of the content of mechanical pollution in the source water after the launch of the water supply system. As a result, after 20 minutes of water analysis, it was concluded that the source water has a large amount of mechanical impurities, including particles from 5 to 100 microns, which requires frequent washing of the filter element. For this, the automatic flushing mode was set at intervals of 16 minutes. This solution eliminates the need to stop the water supply to the Ice Palace.

Three months after the launch of the water treatment system into commercial operation, the specialists of RUSTECHNOBUSINESS, together with the heads of engineering services of the Ice Palace, inspected the water supply system. It was found that during the three months of operation of the filtration system, not a single case of shutdown occurred; there were no interruptions in the operation of the water supply system of the Complex; the filtering string membrane element of the filter does not have any damages or deposits that interfere with or reduce the quality of water filtration with mechanical impurities above 5 microns.

Given that the quality of tap water entering the complex and the amount of mechanical impurities did not change, the final result changed dramatically. Throughout the Complex, the cold water flowing from the taps is transparent in appearance and potable, odorless and without mechanical impurities. When boiling sludge and scale in household appliances is not formed.

Modern innovative water treatment system from RUSTECHNOBUSINESS is very compact. It can be attributed to the “green technologies”, as it does not harm nature and does not require additional maintenance in the form of changing cartridges, filling chemical reagents. 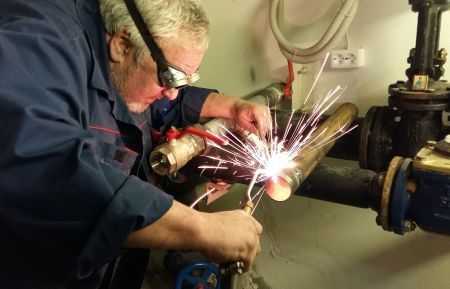